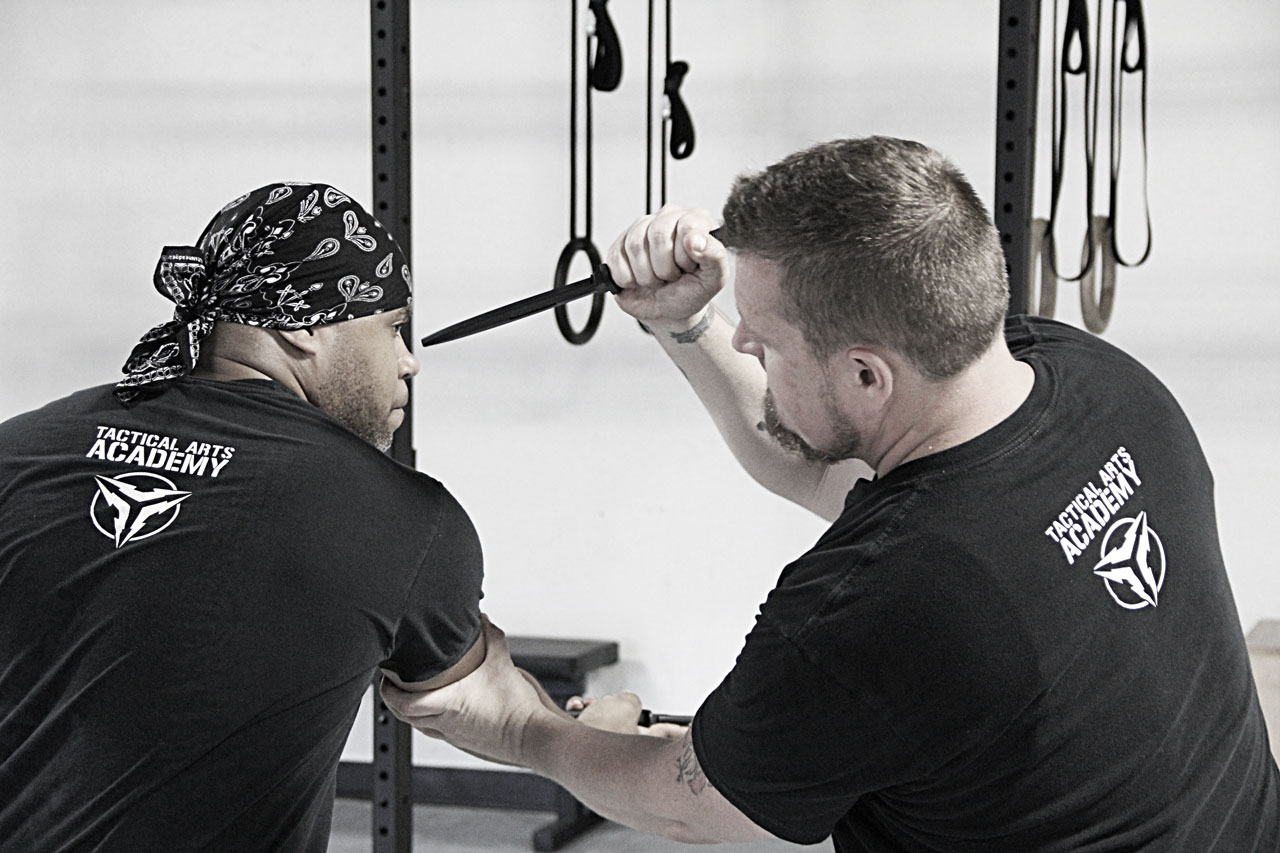 Learning to successfully defend against knife attacks starts with a realistic understanding of the threat itself and the dynamics behind it. This knowledge will help keep you from making mistakes that will leave you exposed when you are trying to protect yourself against a knife attack.

Any size is lethal.  Though a larger knife may be able to do more damage faster than a smaller one, a small knife can still be very deadly.  The structure of the human body protects many of our organs with bone, muscle and tissue serving as a shield.  However, life threatening targets are not all hidden deep behind bone and tissue.  Even a 1/2 inch blade can puncture an artery, open an airway, or disrupt the vacuum required for our lungs to function properly.

Small blades also have the advantage of being concealed easily, a fact that adds another layer to their danger.  Box cutters, with a relatively small blade facilitated terrorists in controlling a plane killing thousands during the 9-11 attack on the US.

Edged weapons injure everyone.  Edged weapons do not respect how fit, strong or trained a person is, they simply penetrate tissue.  Though you can train to absorb a punch and keep fighting, there is no amount of training that will improve your ability to trade knife blows with an attacker.

Just a touch can be deadly. Not all cuts or stabs are lethal, but they can be.  The attacker just needs to be close to you to potentially kill you.  Blocking a punch or thwarting a tackle is difficult already.  Imagine how hard it is just to stop someone from just touching you.  If the blade is sharp and the targeting is correct, an attacker does not have to use tremendous power to be effective.  In using an impact weapon or empty handed strike, force is usually required for a good hit.  With a knife, this is not the case.

Knives are lethal even in the hands of the untrained.  Even without training, someone can kill with a knife.  They simply need the intent and opportunity.  Aiming with a knife is fairly natural, unlike a weapon such as a firearm that requires training to operate properly and to use accurately.  In August 2014, a six year-old in Washington County Maryland, armed with 2 butcher knives, attacked his grandmother, cutting her arm, and holding her at bay.  He then turned to attack police as they arrived to help.  Though everyone survived, the threat was real.

Knives do not require ammunition.  Knives do not have a limited number of uses and so allow an attacker to deliver many uninterrupted blows on one or more victims.  Even mass knife attacks occur, and they can have high numbers of injured and dead.

In March 2014, eight attackers in the Kunming Railway Station in China killed 29 and injured more than 140 others by attacking passengers with knives and cleavers.  They attacked men, women and children indiscriminately with repeated slashes targeting the head and neck.  Uncontested until SWAT teams arrived 10 minutes after the start of the attack, the attackers had no need to stop their massacre.  They never had to reload.

In September 2015, 9 attackers killed 50 workers and injured another 50 in a northwestern Chinese coal mine.  Numerous attacks in Chinese schools have left as many as 23 injured and several dead from only one attacker.   These numbers are high.  Many of them as high as or higher than most mass shootings.

Knives do not malfunction.  Whereas a firearm my fail due to lack of care, improper use or poor quality, a knife is a very simple tool and therefore has fewer reasons to fail.

Criminals are not known for keeping their guns in good working order.  Because of this, it is common that their weapon will fail during a shooting or gunfight.  This fact has helped more than one shop owner successfully protect themselves during a robbery.

Though a poorly made knife may break, knives do not malfunction. This means that in a very short amount of time, many successive blows can be delivered without a technical issue or a reload.  This leaves little opportunity for a victim to recover during an assault to defend themselves.

Knives are readily available.  Even a 14 year old kid can buy a $10 machete from the hardware store.  Every kitchen in America has at least one large knife.  No amount of control measures or laws will be effective in restricting criminals access to edged weapons.  Look at our prison system.  Knives are available in almost any of them regardless of the severity of security measures taken.

Knives are difficult to detect.  It is not uncommon for someone to learn they have been stabbed or cut only after the attack is over.  Often, both the victim and the witnesses of an attack think the attacker is just punching the victim, when, in fact, he was stabbing him.  A knife is quiet and can be hard to see, especially in a low light situation.  If you do not know what you are fighting, then you will likely be exposed to even greater injury or death.

Knives can double the damage.  A knife has the potential to double the number of blows delivered when compared to an impact weapon or empty handed attack.   What is normally a single blow with a club or empty hand strike becomes two blows with a knife using the exact same motion.  With a punch, the attacker must deliver the strike, then retract his hand in order to repeat the motion.  However, a knife attack can chain multiple slashes and thrusts together using each strike to setup for the next.

Both movements are an attack.  This is a two-for-one ratio when compared to other types of attacks.  This approach lends the knife to being quickly deployed in multiple directions, and the economy of motion can be a real advantage over the defender.

Knife attacks have some unique factors that are critical to consider when learning to prepare against them.  Once you are better aware of these qualities, you can better tune your training to be an accurate solution to the problem.  In upcoming articles, we will further explore these issues and make sure you will have a better understanding of your options for surviving an assault involving edged weapons.

If you are interested in learning more about defense against edged weapons, consider joining the Tactical Arts Filipino Martial Arts Program.  It’s focused on training to use and defend against weapons of all types, especially edged weapons.  We can help you learn to protect yourself and enjoy making yourself better.