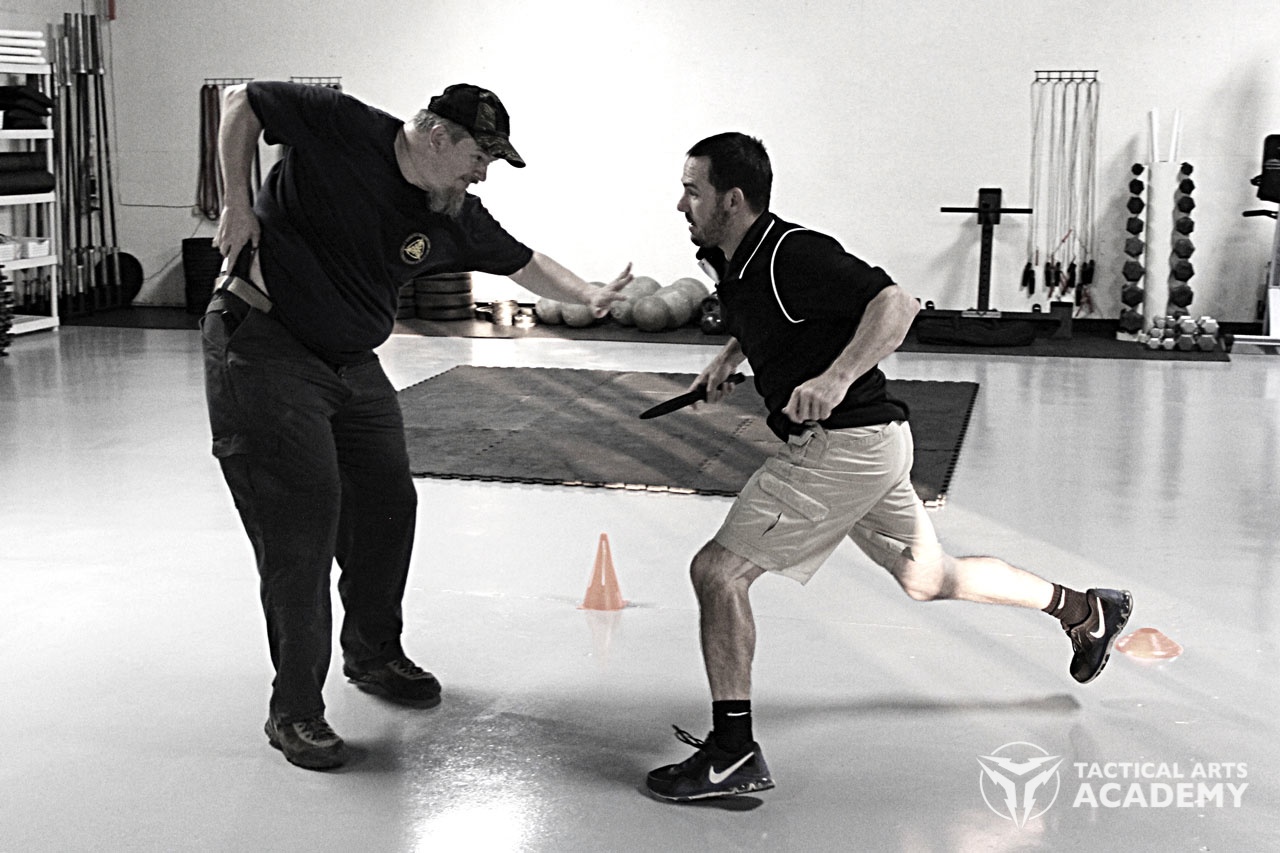 What is an Edged Weapon?

When considering the threat of edged weapons, there are more than just knives.  It is a category of weapons.  For the purpose of developing a defense against edged weapons, we can include conventional knives, blades, etc. as well as other objects that cause damage similar to a knife or blade in the same category.  These include things like homemade shanks, pens, pencils, scissors, screwdrivers, nails and anything else that can pierce flesh with a thrust.  This category also includes keys, keychains, fragments of glass, metal, plastic, eating utensils, sawing tools, and anything else that can cut or tear flesh.

Having this wider definition of edged weapons will prevent you from underestimating the threat.  Often people who have been victims of knife attacks, say they did not even know they were being stabbed when it happened.  This is in part because it can be hard to detect a knife, especially when one is unexpectedly attacked.  But even if you do not see a knife, it does not mean it is not there.  If you acknowledge that other common implements can do the same damage as a knife, perhaps you will expect edged weapons to be involved in any assault and respond accordingly.

The manner in which a knife is gripped can change the dynamics of an attack.  Knife grips largely differ in whether the knife tip is pointing forward from the hand or reversed.  Each grip offers slightly different advantages and variations in edge direction, such as turned inward or outward also create different problems for the defender.

forward grip - In the forward grip, also known as a hammer grip, the knife is pointing forward from the hand.  The forward grip allows lots of maneuverability and a slightly better reach than the reverse grip.

reverse grip - In the reverse grip, also known as the icepick grip, the knife is pointing downward from the hand.  In a reverse grip, the primary attack can be a thrust, but with the blade turned inward, it can also become a hook.  This is especially problematic if the defender attempts to block and gets his arm caught in the hook.  Any attempt to pull the arm back can lead to a fillet of his arm.

palming - Whether the knife is held in a forward or reverse grip, the attacker can conceal the knife inside the palm and along the underside of the forearm using a method called palming.  This is simply intended to make it harder to see that the attacker is armed.  Not recognizing that a knife is present can lead to fatal mistakes by the unaware defender.

Knife attacks include a variety of strikes that each have unique properties.  Some strikes require low effort from the attacker and do little damage, but serve as a means to setup a more substantial attack. Other strikes are used to inflict maximum damage through deep penetration and devastating structural damage.

jab -  The jab is a quick movement that requires little commitment.  Just like a boxing jab, the knife jab is simply a quick attack wherein the knife is extended rapidly and retracted even faster.   The jab can be used to initiate a more committed attack or to test the reaction of the defender.

flick - The flick is often seen as a jabbing movement with a quick extension of the wrist.  It can be used to attack the eyes, rip a chunk of flesh off the hands and arms, or simply used to create a flinch response and setup a more significant attack.  The flick is really just a variation of the jab, and has many of the same properties.

cut - The cut is more of a hacking or chopping motion that is seen more prominently in larger blades.  Imagine the hacking motion of a machete.  It’s function is to cleave through flesh and bone.

slash - The slash is a drawing motion, wherein the blade edge is pulled across a target.  Imagine the action it takes to cut a steak.  This drawing action allows the cutting edge to penetrate deeply.

fillet - A fillet is similar to a slash but often occurs when an edge cuts to the bone then shears off flesh as it scrapes along the bone.  This is common in defensive wounds where the defender raises his arm to block an incoming attack and the blade slashes then slides down along the arm.

thrust - A thrust often gets deeper penetration than a slash or cut, especially with a smaller knife.  This can make it potentially more lethal than a slash depending on the blade size.  A thrust is very hard to defend against because the attacker only has to point at you in order to be successful.

An attack can include more than one of these types of strikes.

Common patterns of delivery are seen in knife attacks.  Regardless of grip, often repeated thrusts are seen along the same line of attack.  For the forward grip, the attacks are typically low thrusts to the body or high punch-like thrusts to the neck.  These neck attacks are often on the left side because it is more convenient for the more common right-handed attacker.  With the reverse grip, attacks tend to be downward thrusts at the neck and chest area, repeated along the same line of attack.  Sometimes the attacker with grab or off balance the victim with the empty hand and then repeated attack with the knife.

Though some angles of attack are common, there are other options that make allow for multiple angles in one attack.
We have a saying in our knife training: With every thrust there is a slash and with every slash there is a thrust.   This is simply a observation that multiple strikes can be repeated quickly by linking the movements of both a thrust and a slash in succession.  This is economy of motion, and it can lead to more damage, quicker.

The most common place for a knife to be carried is hidden somewhere along the waistband.  The weapon is either secured in a pocket or somehow secured to the belt or waistband of the pants.  A knife is sometimes carried inside the waistband or outside.  Often, it will be concealed under an untucked shirt.  This area of carry lends to the frequency of low line attacks.  The knife can be drawn from concealment and a low attack can immediately be delivered.  Not only is waistband area a convenient place for the attacker to access, but it is also harder for the victim to see when the two are close.

Edged weapons are also hidden inside hats or hair, around the neck and chest area, or inside socks or shoes. Knives can be easily camouflaged inside a paper bag or folded newspaper, so that it can be ready in the hand and even used while remaining concealed.

Back in the 90’s, thugs in New York would often carry razor blades in the mouth and spit them out when needed.  The razors from a box cutter are used not only because they are easier to conceal than a larger knife, but also because you can be slashed with the razor and not know you are cut.  They would simply pinch the razor between the thumb and index finger or hold it between their ring and middle finger.  Small corners of razors can be broken off and taped to the hands to resemble a bandaged area, but then be used to slap at the victim or slash at the neck during a clinch.  Though the cuts with these fragments are not deep, they can be demoralizing.

Someone may catch you off guard using an unexpected method of deploying an edged weapon.  For example: Fish hooks or razor blades can be inserted from inside a baseball cap so that they protrude from the back of the cap facing upward.  With a quick flip of the hat the attacker can target the eyes and face of his victim.  Some criminals even sew fish hooks protruding from the back of their jeans pant legs to injure a police officer during a "pat-down" search.  Though you may not need to pat-down anyone (without their consent), you may grab someone by the arm or leg during a violent confrontation.  The advantages to most of these methods are that it is harder to see that there is a weapon and the existence of the threat is unexpected.

Sometimes the threat is even worse than you would expect.  In traveling the Philippines and Indonesia for training, I have met a few old fighters who had hard, sharpened thumbnails they would use for attacking the throat, eyes, and ears. They literally had claws.  Though technically they are unarmed, the threat of their touch is deadly.  Sometimes those old men would even add poison to the tip of their nails and use a scuffle as an opportunity to get in and introduce it to their opponent.  When in close, they would jam their poisoned thumbnail into the ears, eyes, or even the mouth of an opponent.

In many cases, an attack may start as an empty handed assault, but later become a knife attack.  This is why we must always assume an edged weapon is involved in an attack.  Assuming otherwise, could leave you exposed.

Knife attacks have some unique factors that are critical to consider when learning to prepare against them.  These factors are further complicated by the various grips and strikes that can be used with the knife as well as the options to conceal and camouflage them.

This article is only an introduction to the issues that make training to defend against a knife attack difficult.  In upcoming articles, I will discuss more details about the solutions and methods we use in training to survive an attack.