The Filipino Balisong - A.k.a. the Butterfly Knife 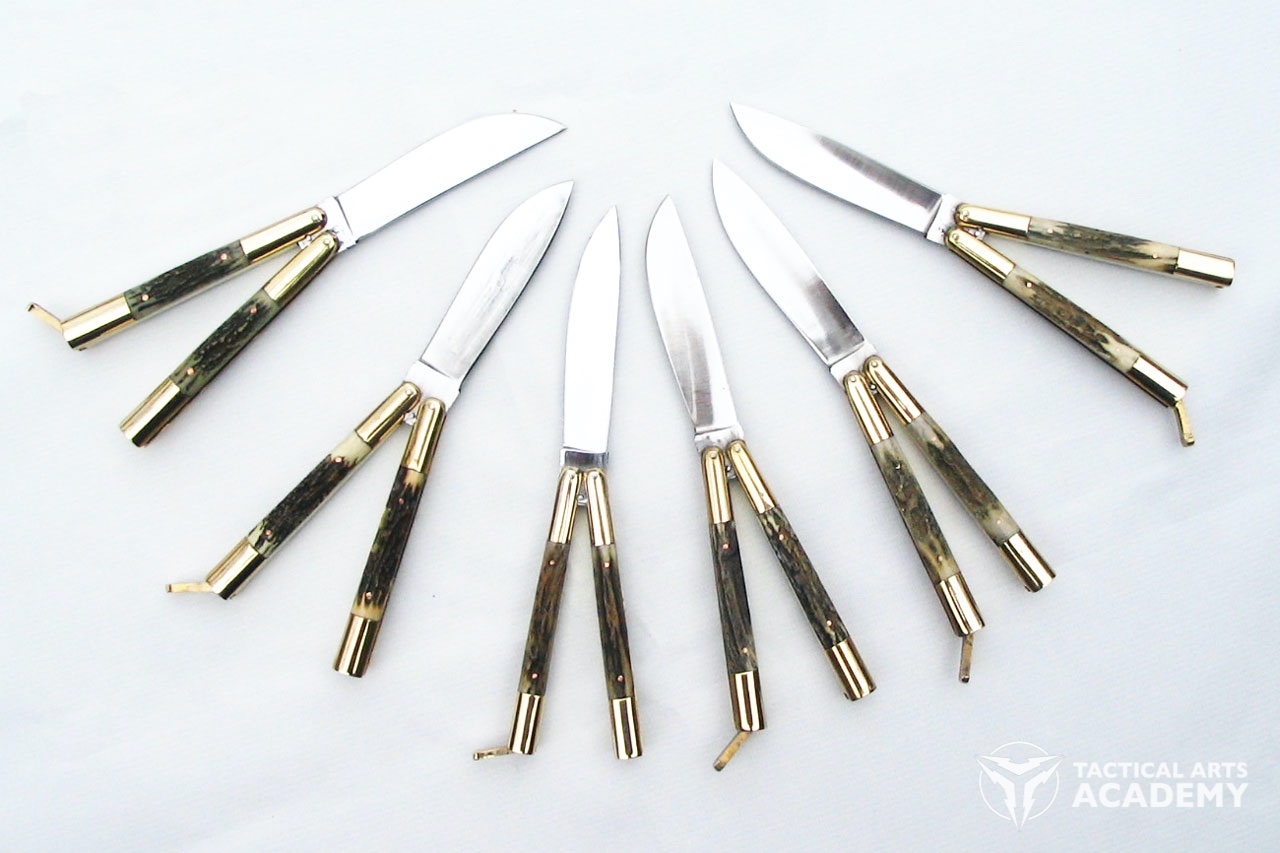 The balisong has long been known as a beautiful and unique weapon of the Philippines. Also known as the Batangas knife, butterfly knife, clik clik knife and more, the balisong gets its common name from two words. The first is bali, which means to bend or to break in Pilipino, and the second is song, derived from sungay, the horn of the water buffalo. The balisong was once entirely made from the easily carved, plastic-like buffalo horn. Because the knife folds or bends and was made of this horn, the combination of words, balisong, became its name.

Legends of the balisong also tell of a Filipino warrior who once killed twenty-nine opponents with his balisong. From this story comes another popular name for the blade – veintinueve, twenty-nine. Some say that perhaps this was twenty nine actually refers to the length of his blade. The actual origin of the blade design is unknown, but it is the Philippines that made it famous. Some attribute Perfecto de Leon for having made the first Filipino design in the early 1900’s. Today, balisong are made in the Batangas province of Luzon in the northern Philippines.

Not far away from the beautiful views of Taal Volcano, famous for its "island within a lake, within an island, within a lake," is the small dusty municipality, Barangay, Balisong. Families produce the knives in small workshops found in this small town named after the blade itself. Both there as well as in a few nearby neighborhoods are several workshops that make the balisong knife. Often, these workshops are dedicated to production or assembly of only one part of the balisong. A panday, blacksmith, will produce the blade, another artisan will sharpen it. Someone else will produce the handles, and others will polish the final product.

Although some balisong are made from pure ingots, billets of stainless steel, or other high-grade steels, the blade of the balisong is often made of recycled tool steel or other carbon steels. Car parts such as bearings or leaf springs often serve as raw materials. When procuring the materials, the panday considers the hardness of the metal, as steel that is too hard will result in a brittle rather than a tough blade.

Usually, the actual blades themselves are smithed in a small barrio, neighborhood, just outside of Barangay Balisong. There, the typical forge and bellows used by a panday is the same as it has been for centuries. Piston bellows are pumped to drive the air. The air is channeled into the forge in order to fuel the charcoal fire. This must be done to produce a fire hot enough to bring the metal to a temperature above its recrystalization point and therefore suitable for hot forging.

The panday will heat several pieces of steel at a time to prepare them for forging. As each piece is ready, the panday will remove them from the fire, scrape off any impurities and hammer away. During heavy forging, the panday’s smaller hammer is supported by an assistant with a large, two-handed hammer. In order to initially shape the blade from the stock metal blank, the panday guides his assistant to cut the blank by wedging another steel piece through the malleable, hot metal. They then flatten and compact the remaining piece. While pounding, the panday moves the metal stock over the anvil shaping and conditioning the blade. Both men time their careful strikes together in a rhythmic succession of blows. Each part of the process requires repeated heat-treating so that the blade can be fashioned properly.

Eventually, the blank is fully shaped into a blade, and tempered in either oil or water. An edge is ground and later sharpened. The new blade is drilled and assembled with handles and decoration by another craftsman or group of craftsmen back in Barangay Balisong.

Handle materials for the balisong include, but are not limited to brass, wood, bone, ivory and horn from the carabao, water buffalo. One artisan cuts the raw bone or wood stock to be used as the base of the handle. Another artisan shapes brass liners for the inside of the handle, which houses the swinging mechanism that allows the balisong to open and close. Brass is often used for ferrules at both ends of the handle. Decorative elements are also inlaid or laminated on the handle surface. Eventually, all the parts are assembled and the entire piece is filed and ground into a unified shape. This final blade and its handle are then polished and ready to be displayed for sale in one of the many shops along the small roads of Barangay Balisong and neighboring towns in Batangas.

In selecting a balisong, there are many blade styles and decorative designs from which to choose. One often tests the strength of the blade itself by raising the weapon in an ice pick grip and hammering it forcefully into a one-peso coin. If the blade is made properly, there will be no damage to its tip. This test is a demonstration of the blade quality, craftsmanship and ruggedness. The authentic balisongs from Batangas are strong, functional blades that are beautiful by design and capable of igniting a fire in any who hold them.

Of course, this is just the beginning, or merely the birth of the blade. It is when a balisong reaches the hands of an expert that it really comes to life. Dancing between the fingers and seemingly moving on its own, the balisong clicks rhythmically when handled smoothly. Much like the fascination of playing with fire, manipulating the balisong in graceful and quick maneuvers has a mesmerizing effect to both the holder and those who watch.

One does not need to be an expert to enjoy the balisong. The balisong is simply a folding knife, but it’s design offers countless methods of opening, closing, spinning and rolling that can be learned merely with imitation and experimentation. In time, movements become intuitive and creativity rewards one with discovery. Ultimately, the balisong offers more to than other knives. It can be used not only for combat and utility, but also art and entertainment. From its creation to its application, the balisong is a beautiful, unique knife and truly an icon of the Philippines.

Tweet
Tags:
balisong
Top 10 Tips for Learning Kali, Escrima, and Arnis
Learn One, Learn them All - Commonality of Motion ...